Take one painting by Katherine Bakhoum Tisne: The black tree. Five figures in a dark landscape. Darkness like expectation, and colors challenging the eye. The man in blue is leaning up against the trunk of the tree. It is hardly a tree. It is a brain, a brain hibernating in history. Can the man in his blue robe feel it shake, quiver? Probably not: the work of the tree is slow. It has a long way to go.

Katherine Bakhoum’s art comes up out of an Egyptian childhood and from the distance of a life spent in France. What is left unsaid is as important as what is shown. A glance is not enough. Stand in front of these canvases for a while. Take your time. Linger. Do not slide your finger across the screen of the iPad. There is much

more here than meets the eye. Decorative yes, as in old orientalism, when everything was texture and what wasn’t texture was veiled, — decorative but also tantalizing, a reincarnation of old spirits, dervishes, orientalist motifs and the stuff of a once powerful civilization, the better to suggest it all might just come to life again..

Bakhoum works quickly but what she paints is slow. Standing on the shore, or on a jetty, the pastel figures often look as they had always been there, hoping against hope that something will happen. They are not waiting for the tide to come in, they are waiting for whatever might appear on the horizon. When nothing does, the painter makes it happen. Color dances. “Stop him from walking into the dark sea of this dream” says the turquoise robe on the man moving in deeper. “Come to the other side of the canvas. Talk to him. Find out who he is.”

In the same spirit, at the end of a pier, a dancing man’s trousers are yellow. He is almost part of a circus troupe, almost, but not quite. The sea is too gray, the landscape is too lonely to evoke a circus and a circus crowd. Who is watching here? Who is listening? In the same way, in another work, in the desert tundra, the shepherd tends his sheep in a bright red shepherd’s gown. The sheep do not notice, but we do. We notice that the shepherd wants to be noticed. Is it just for his beauty? Or would we like to hear his song? And the whirling dervish with the mad glint in his eye: isn’t he glancing our way, wondering whether we know why the painter chose to capture the lightness of his robes, with the thick white of her pastels, set him in the middle of that canvas, as though he was still an active spirit, whirling beyond the walls of the gallery?

The choice of ancient subject matters, the echo of orientalist pieces in the collages, like the echo of the appeal of ancient gestures, of foreign lands, and domestic tapestries, all this weaves up out of Katherine Bakhoum’s creations. Sometimes we only have the line of a horizon on which to hang our imagination, sometimes we only have the trace of a profile in the shadows. What we always have is a persistent belief in beauty.

Where there is beauty, there is hope. Katherine Bakhoum has abandoned neither. 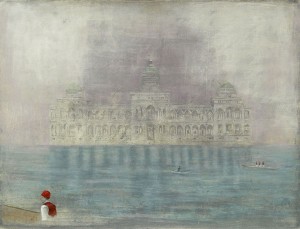 In Katherine Bakhoum Tisne’s pastels, the tools of the artist’s labor have become a metaphor for the work accomplished. There are no demanding oils, no clamorous acrylics. What is, whispers.

All is quiet, and what is not quiet, is pastel anyway. Yet, just beyond the paper that receives these quick, covering, dashing, quivering, thickening, exciting but always tender strokes, something else is going on. Colors have been rubbed into the plaster of old walls. Their sources have been effaced, distanced, become decor, like all sources eventually. Yet they are there, we can feel them, they vibrate.

Work by Katherine Bakhoum Tisne has a tone of voice. Her paintings move with it. The figures dance, and the voice sings – or does it? Maybe it only speaks, — making translation into painting possible – speaks of an intimate ambition, of a sweet folly, of ways out, and of ways in to what has been lost, and what will be discovered. And also just of what is.

Whispering galleries are acoustic miracles: you cannot see the other speaker. In these fabled arcades, the palace gossip steps into the light. “Psst,” he might be saying, “I saw him with her in the garden. He was giving her grapes.” Or is it something else entirely? Elsewhere, a wanderer spins across a horizon, his white robes unfurling in the murmur of a breeze which his dervish spirit generates. Viewed at the distance of several light years, the colors of a bonze’s red robe punctuate the text. Tufts of trees scan the line of a horizon that hums. We get closer. Bodies are letters. Or are the bodies, stars, forming constellations even as we look? In the spell-binding oriental portraits, the regard in the eyes of those portrayed disguises its own wishes, fulfills them behind the mask of beauty. Language and stars come from the same place. We are listening to someone else’s dreams. Circle the gallery clockwise. Now go the other way. You are remembering these paintings for the first time. What was décor at first, now comes with its own fresh feeling. Welcome to Katherine Bakhoum Tisne’s firmament. You have succumbed. Call it a little triumph. I would.