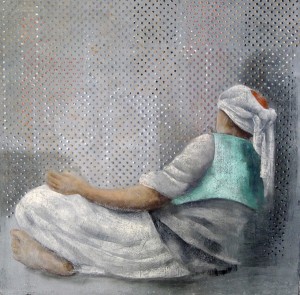 Occasionally, you walk into an exhibition and you feel like you’ve stumbled onto an alternative world. Stepping into the petite Safarkhan Art Gallery in Zamalek, the audience witnesses an otherworldly collection of enchanting paintings far from daily life, extending an invitation to an alternate reality created by French-Egyptian artist, Katherine Bakhoum.

Bakhoum was born in Cairo in 1949, but she resides and paints in Paris. An air of nostalgia pervades Bakhoum’s artwork; her pale palette is evocative of a translucent daydream. The artist sprinkles some magic onto Egypt’s contemporary art scene; she designs figures that look right at home on the canvas, clothed in soft, pastel colours. At times it feels that Bakhoum’s canvases are woven, rather than painted. She manages to master backgrounds, be it a pastoral field or a heaven-like sky.

The half Egyptian, half French artist combines both Orientalist style painting and contemporary collages in one exhibit, evoking strong emotions, while inviting onlookers to an alternative world.

Bakhoum renders figures in incandescent hues, forcing a certain magic to emanate off the canvas. It’s in the twirling dervishes, as their white gowns seem to echo the moon’s glow, each bearing a bold red tarbush like a crown. It’s in the young girl’s profile, her head tilted to the side to reveal a deep and constant gaze, and a delicate silver earring.

Bakhoum’s paintings appear as flashbacks, but they are not the childish recollections of the past; they are mature reflections on a world that was left behind. The artist relives her Egypt-bound childhood on canvas, and North African subjects feature heavily in her work.

Bakhoum gives her subjects space; they recline across the width of the canvas at times, stand tall at others. A certain majesty is evident throughout. The lack of clutter evokes an ethereal sense; it is like Bakhoum has stolen a moment in time.

An aura of dissolution emanates off of Bakhoum’s ghost-like creatures. Peering into the paintings, you lose yourself for a moment, and mistake the celestial scene and its distinct individuals, with a dream. But to your delight, it stays there, and as you blink, Bakhoum’s people don’t. They remain perfectly still, as you move around, transfixed in a moment, floating in paled tones, in another time.

Contrastingly refreshingly with Bakhoum’s coy Orientalists paintings, the artist showcases four collage pieces that demonstrate her versatility. She paints African figures, surrounded by scraps of paper weaved together haphazardly to contrast with the deliberate brushstrokes in the rest of the collection.